Pastor Erickson has been the pastor of Jersey Shore Baptist Church since 2002.  Having grown up in Ocean County, Pastor Phil has always had a burden for the south Jersey area.  After graduating from Bible College in Longview, Texas, he and his family moved to Galloway Township with the vision of digging in and serving the Lord and the people of Atlantic County.

Pastor Phil and Cindy Erickson have been married since 1985 and have four children and nine grandchildren.  His oldest son Phil Jr. and his wife, Katelyn, have three boys (Jaxon, Caleb, and Philip III), and serve at First Baptist Church of Cottondale in Paradise Texas . Their oldest daughter, Melissa, and her husband Wesley Clayton have a daughter (Amelia) and a son, (Barrett). Wesley is serving our country in the United States Air Force. Daughter number three, Samantha, and her husband Justin Mears have two daughters and a son (Selah, Emmerson and Westin) and are serving together in the youth ministry here at the church. Hannah is the youngest daughter, and is enrolled at Vision Baptist College in Berlin NJ, and is still at home with mom and dad. 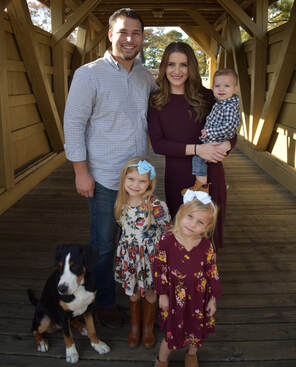 Justin Mears has been the youth pastor of Jersey Shore Baptist  Church since 2013.  Having grown up at JSBC, Justin has always had a burden for the teenagers of Galloway NJ.  He has been married to  his wife Samantha since 2013 and have three children Selah, Emmerson and Westin. Both Justin and Samantha graduated from Jersey Shore Baptist Academy and have attended West Coast Baptist College in Lancaster CA.

Wade Thompson - Assistant to the Pastor

Wade Thompson has been a member here at Jersey Shore Baptist Church since 2001. Having grown up here at JSBC Wade has a passion in serving the Lord here in Galloway. He is a graduate of Jersey Shore Baptist Academy, and has graduated from Vision Baptist College in Berlin NJ. Wade now helps Pastor Erickson with the administration side of ministry as well as working with the media, design, and technology of the church.